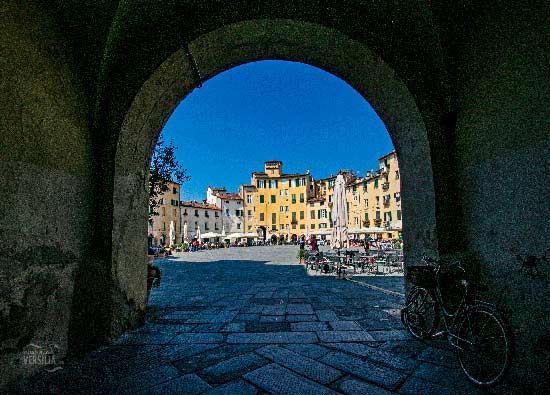 Lucca is one of the most important Italian cities of art, famous for his intact and sixteenth-century walls long 5 kilometres around historical centre (viable only on food or by bike) proposed as heritage of humanity UNESCO.

The medieval long street called Via Fillungo brings together the commercial establishments and the squares like Piazza San Michele with her church, San Martino where the famous Duomo stands and finally Piazza del Giglio with his theatre.

Lucca is the hometown of numerous composers, artists, architects and poets.

Is also famous for the cultivation of cereal, vines and olives, basic ingredient of typical Tuscan food, like tordelli (pasta), buccellato (sweet bread), castagnaccio and pasimata, everything wet in a good Montecarlo Doc or other wine from Lucca’s hills.

There are other places of interest:

Polo Tecnico Lucchese, which rises in the area of Oleificio Bertolli, is the seat of trade fairs (MIAC..), exhibitions (Expo feline, Collezionando..) and congress.

The most important sports facility is the Porta Elisa’s stadium that accommodate the football match of Associazione spostiva Lucchese Libertas or the Campo SCuola “Moreno Martini” where the match of basket or athletics take place.

The most important events of the Lucca territory are:

How to get to Lucca:

Lucca is connected to the highway A11Firenze-Mare con two motorway exit (East and West), there is also the connection to reach Viareggio, little city on the sea. Other important way is Strada Statale 12 del Brennero that start in Pisa and finish in Austria.

Lucca train station offers a valid connection to Florence, Pisa, Viareggio and other important places, is also provided by parking fees inside and outside of the walls.

All these important aspect make Lucca an important strategic point to visit: :